The Future of Automated Analytics

An article was recently published on Niemanlabs about a Slack bot that was used by The New York Times to help them decide which stories to post to social media.

If you’re not familiar with Slack, it’s essentially an organizational chatroom that was developed as an “email killer”. It features chat rooms organized by channels, groups and direct messaging. But the really cool feature on it is that you’re able to build applications to communicate directly with it, allowing you to do what The New York Times did with their algorithm. 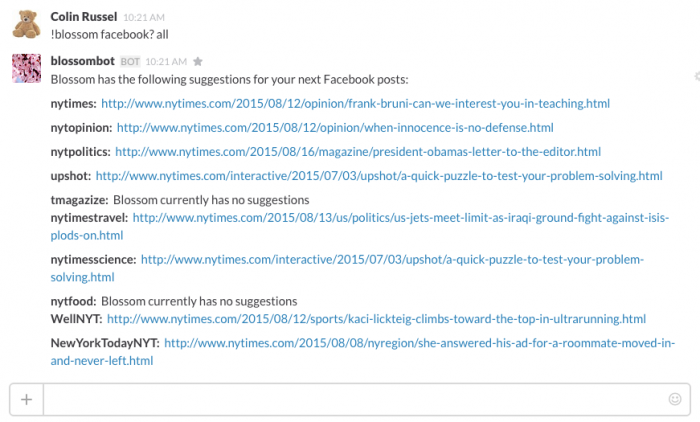 Blossombot was invented to combat the rising pain of knowing when to release what article where on social media. As media outlets such as The New York Times, publish over 300 content pieces per day, it’s hard to decide what’s going to go viral to generate the most page views.

Enter Blossombot. Blossombot was developed by the Times’ data science team to remove the guesswork in finding the right story to post to social media platforms. The engine running Blossombot is an advanced machine learning algorithm using Java, Pythom and MapReduce. Combined with Slack’s chat bot, it made the tool extremely easy to adopt for the entire organization.

The results are extremely impressive. The typical Blossom post gets about 380 percent more clicks than a typical non-Blossom post.

This is just one example of the future of Automated Analytics. Imagine if you’re able to apply this recipe to other industries, such as entertainment. You’d be able to spot what videos are going to go viral, which songs will hit the radio or which upcoming singers will make it big. As content on social media now have a half-life of less than 24 hours, the importance of identifying the capitalizing on opportunities become increasingly vital.

But Analytics isn’t the end. Automation can go further beyond that. Leads can be generated by capturing people with purchasing intention and matching them with the seller that best fits all the buyer’s criteria, eliminating many of what we consider key metrics today.

We’re excited to see where the future of Automation can go, and what impact it will have on the countless industries its bound to disrupt.

Have you seen any trends of automation making an impact? We’d love to hear your comments below!