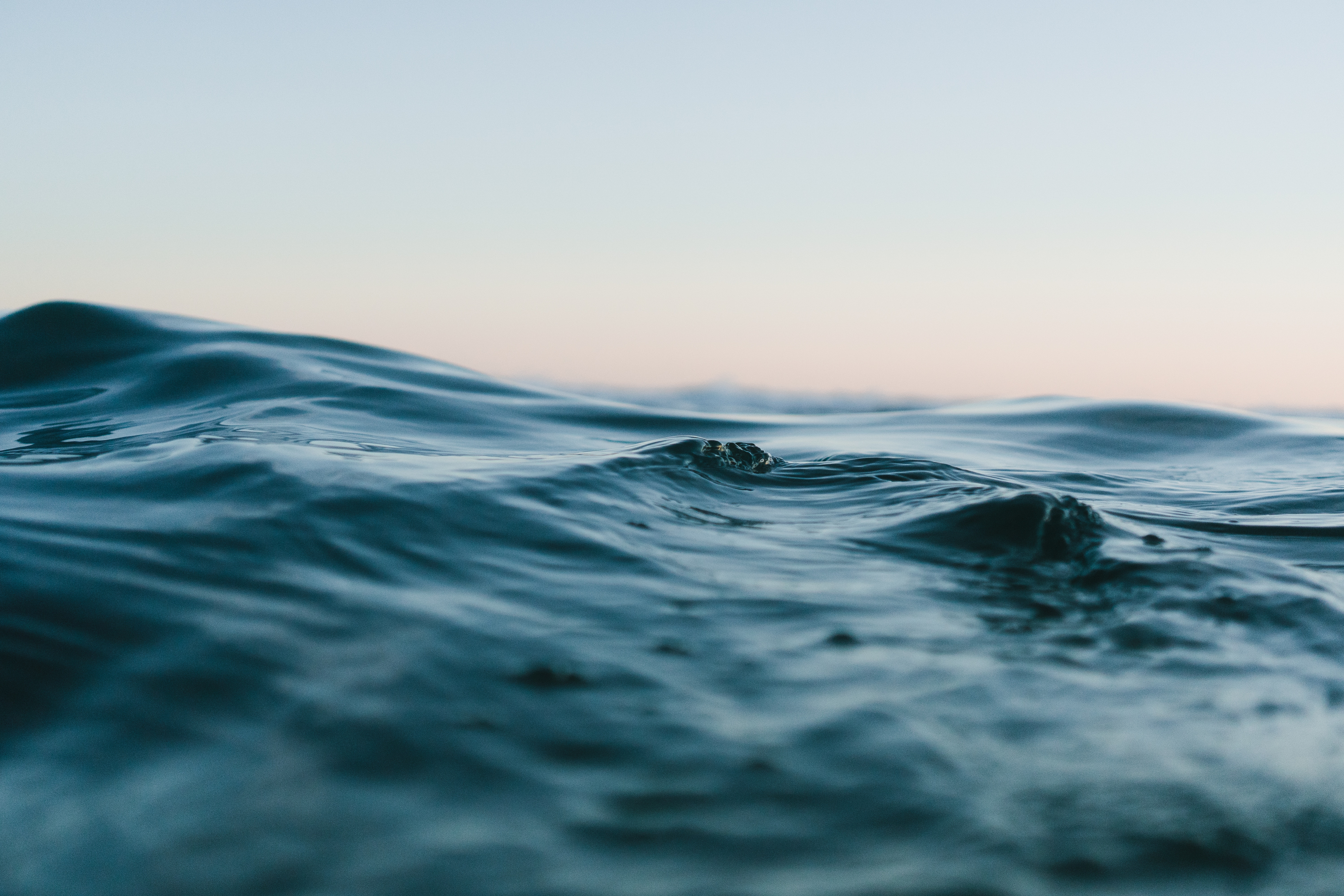 The problem of Plastic Pollution is bigger than we know

Did you know that there are more than five trillion pieces of plastic polluting our oceans? Five trillion is already a scary number – possibly larger than any of us would have projected. However, it’s the impact of this debris that’s truly astonishing.

Unlike paper and other biodegradable trash that ends up in our waterways, plastic is forever-trash – it doesn’t degrade, evaporate, or become part of the Earth. Instead, it accumulates in our landfills, litters our common areas, and most devastatingly, corrupts our ocean waters.

Plastic in our oceans is unsightly, but the trash aggregates out of sight, far off shore. Because of this distance, we don’t feel the immediate impact. Other species, however, are highly aware of their home being polluted. Over 100 million marine animals are killed each year by plastic pollution, usually in one of two ways:

Entrapment. Plastic of all kinds – and many other trash materials – can harm any marine animal with ease. Plastic loops or netting strangles some animals. Others are ensnared and left tethered to sea plants, coral, or other edifices by a plastic trap, rendering them unable to move to acquire food, run or hide from danger, or live normal and healthy lives. Sea creatures unable to wiggle free are still hindered by fins, tentacles, or other appendages compromised by plastic. Dragging this debris puts marine animals at risk of being caught or trapped. The material also adds unnatural weight to their movements, which can be fatiguing and adverse to survival.

Ingestion. Sea creatures are ingesting plastic at an alarming rate, but this unhealthy meal isn’t just harmful for each marine animal who eats a plastic particle. Nearly all sea creatures are eaten by another sea creature, so any fish or ocean animal that ingests plastic is passing on that burden – the plastic is never digested properly so it never goes away. If nothing else, the plastic particles will be expelled in fecal matter which is then recycled back into the ocean to be ingested again. 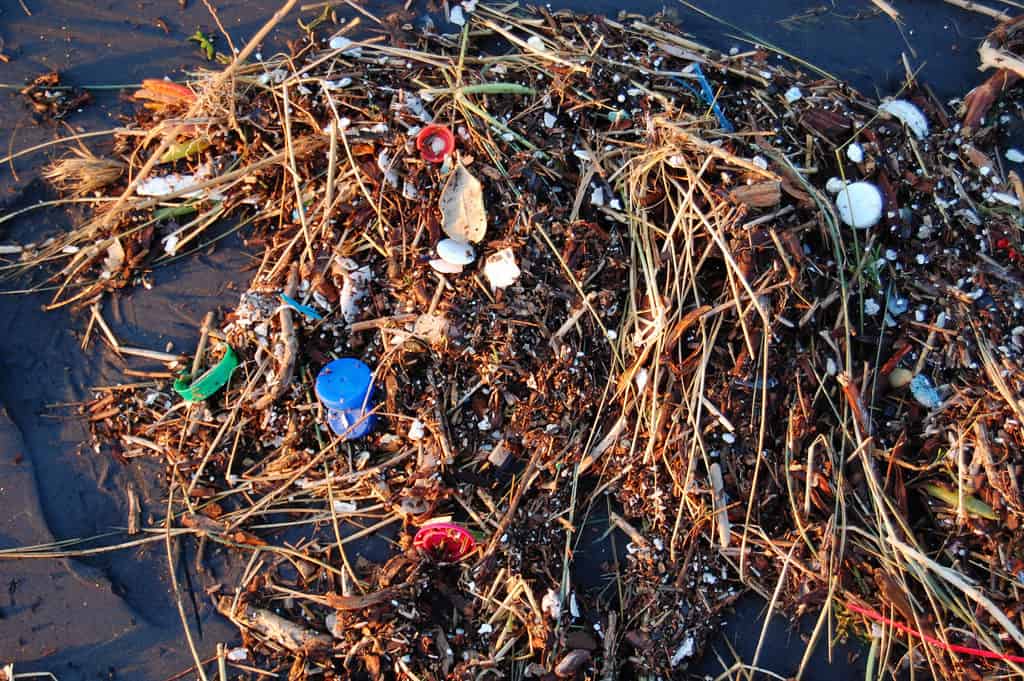 As if the threat to animals, and to the food chain, wasn’t enough of a negative impact, the high concentrate of plastic pollution is actually decomposing and emitting chemicals like bisphenol A (BPA). BPA is toxic for humans and animals. Further, our global ecosystem is a precious and symbiotic one that relies on balance. When synthetic pollutants threaten this balance of our ecosystem, plants, animals, and people are all at risk.

If animals and people and food and the environment aren’t important to you, consider this. The UN estimates financial damages of more than 13 billion US dollars per year as the result of plastic pollution alone. The impact threatens the fishing industry, restaurants and food service, coastal tourism, and any seaside business.

Where is all the plastic in our oceans? 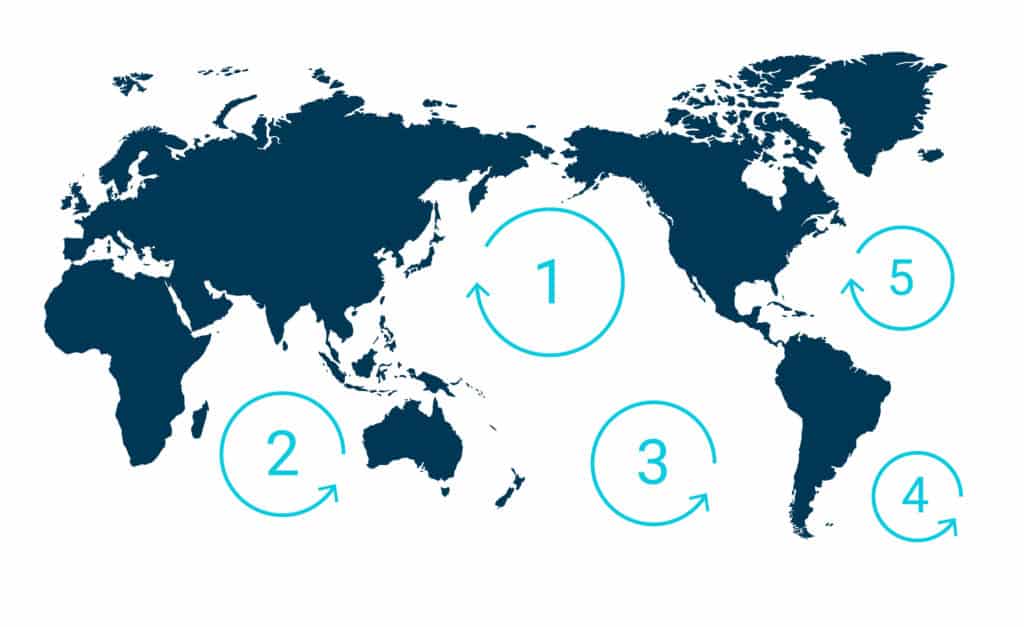 There are five areas on our globe where ocean water recirculates and collects as you can see in the figure above. The currents circulate, collecting plastic pollutants but never ejecting them. These areas have come to be known as garbage patches. The largest of these gyres, the Great Pacific Garbage Patch, sits in the Pacific ocean between California and Hawaii.

The Ocean Cleanup has a solution

The Ocean Cleanup is a nonprofit organization that has set out to change the trajectory of these garbage patches and plastic pollution as a whole. This team of more than 70 scientists, engineers, and environmentalists is led by Boyan Slat. Slat is a 24-year-old Dutch inventor and entrepreneur who founded the organization at just 18 years old. The team has devised a sophisticated plan to make ocean cleanup mechanized, autonomous, sustainable, and – well – possible, for the first time. Beginning with feasibility studies and crowd-funding in 2014, and launching massive expeditions and testing in 2015 and 2016, The Ocean Cleanup went from a brilliant idea, to a very real solution. 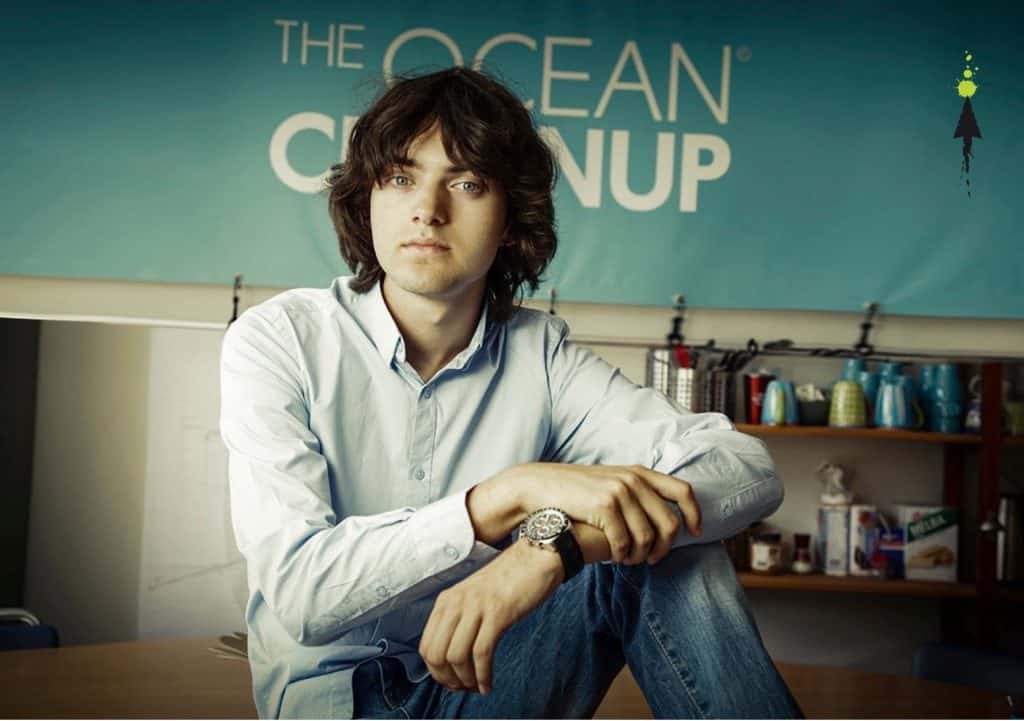 Garbage patches have been studied since the 1970’s but initial studies weren’t as comprehensive as needed. At the time, technologies just didn’t have the bandwidth to survey these areas. Instead, teams took samples of the plastic soup to bring back and study, making assumptions about the entirety of the problem. Since then, the GPGP has grown to one-hundred times its surveyed size and hasn’t stopped. In fact, growth has increased even more exponentially in the last four years, causing even greater havoc.

Ocean Cleanup took an aerial approach in 2016 by overhauling a military plane. This expedition allowed scientists to accurately map the GPGP dimensions and render 3D analyses of the plastic found there. 10 researchers, 3 technicians, and 7 navigators took the named-by-Twitter Ocean Force One plane above the GPGP.

The first action phase of the Ocean Cleanup project has just launched. On September 8, 2018, the Ocean Cleanup team deployed their first cleanup system, dubbed System 001, out of San Francisco. This mechanism is currently set 240 nautical miles off shore in the Pacific Ocean. The floater is now in a trial phase for two weeks to finalize operations. After that time, the system will be moved 1200 nautical miles from shore, into the GPGP, where cleanup will begin. 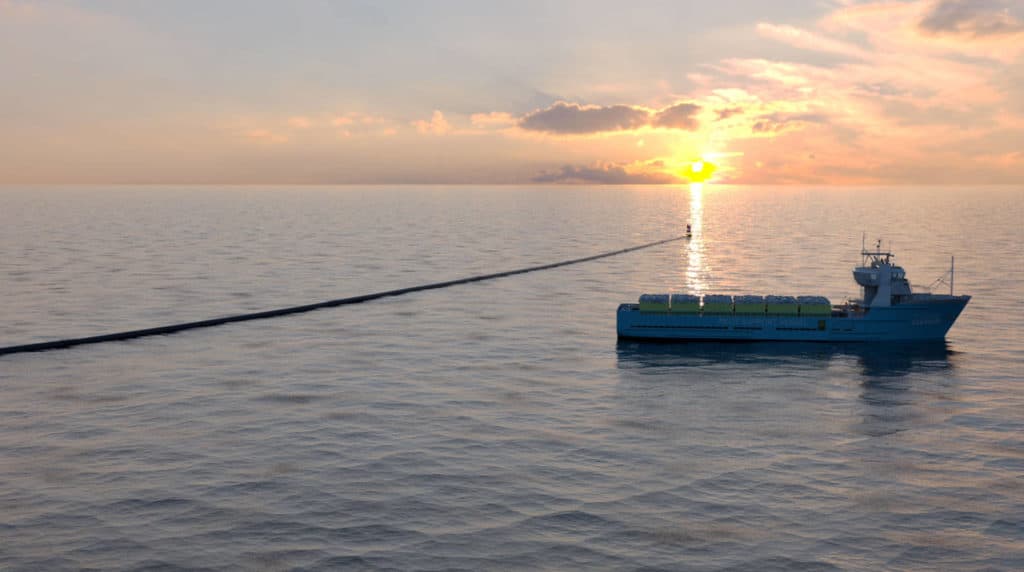 The team tracks their milestones, updates the public frequently, and shares incredible video from every viewpoint on their YouTube channel and social media outlets.

The Ocean Cleanup team has carefully considered the duration impact of their project. No excess energy will be expended to set this project in motion. These systems rely on ocean currents for natural inertia and all lights and electricity will be solar-powered. The team has also considered the impact on marine life by ensuring that cleanup mechanisms are not netted or webbed and cannot catch or trap any marine life. Any immobile creature will flow with the current naturally beneath and away from the mechanism. The mechanism will also move so slowly that its velocity cannot harm any marine life or disrupt marine living.

The Ocean Cleanup team plans to launch 60 systems by 2020 with corporate financial support. With these fleets, cleanup will expand from the GPGP to the other four major gyres on the globe. The team projects that we could see a 50% cleanup of the GPGP by 2023. This figure could increase to 90% removal of oceanic plastic pollution by 2040 with a fully funded fleet. If your company wants to sponsor this incredible environmental effort, contact the Ocean Cleanup team.

The Ocean Cleanup team has a plan to make their expeditions sustainable by recycling the plastic they pull from our oceans. By doing this, we can create a cycle where the plastics we must use are more sustainable and less wasteful.

However, as Ocean Cleanup has just launched their first cleaning system, the rest of us can work to slow the impact of plastic pollution. How did all of this plastic get where it is? What is stopping this from becoming an ongoing battle? How can we make sure that results from projects like these will be sustainable?

What we know: The litter you see on the sides of roads is primarily discarded from vehicles traversing that roadway. However, in our oceans, plastic pollution isn’t coming from the ships at sea – at least not primarily. According to the Clean Water Action coalition, 80% of marine debris comes floating from land. Of that debris, 80 million tons comes from plastic food packaging and plastic bags. It was a mistake to become so dependent on plastic as a society, but we control what we do going forward.

How do we better our approach to plastic? The accountability to prevent plastic pollution is a human one. We must all make conscious efforts to reduce our use of plastics and be mindful of how we dispose of the unavoidable ones. Head over to the Green Education Foundation to learn more about what you can do to reduce plastic waste and pollution. 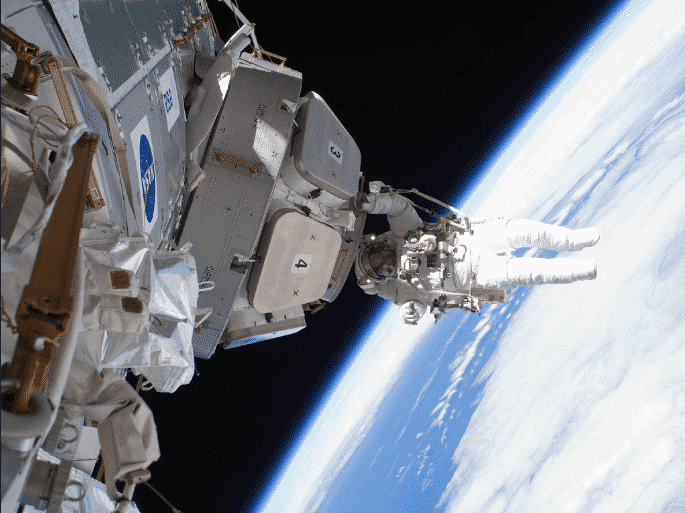